Aria Reservoir is one of the main story line dungeons in Wizardry Online.

While more difficult than Chikor Castle a full party is not required to complete this dungeon. A duo should be able to comfortably complete this area.

How to Unlock Edit

To get into this dungeon, be sure to complete the quest "The Masked Aristocrat". Afterwards you'll need to speak to Dwark, the Adventurers Guild Leader and do a simple in town quest which will end with you receiving the permit to get into Aria Reservoir. Note that if you are killed while any quest giver/receiver is talking to you, you have to go back to them go restart the conversation.

All materials required to complete this dungeon are listed below. They are dropped by specific enemies populating the dungeon, but they can be traded or sold in player shops or the auction house.

A ticket is required to pass. Ticket can be found by following the open passageway down the stairs to a room and actioning the first dispenser on your right (K7).

Note: Named Zule warrior has a ton of HP, so be sure to bring a healer, or a shield, or have the appropriate level to take him. Others are named blood suckers.

A puzzle is required for entry. Talk to the gargoyle statue to receive 10 coins (not in inventory, no text confirming). Down the corridor North of gargoyle statue (I8/I7) there are three scales with dialogue telling you how to solve the puzzle. The closest scale requires 1 coin, the middle 3 coins, and the furthest 6 coins.

Note: This boss is a great area to farm Soul Rank and experience up to level 15 and SR5 (and beyond). However the mobs will break your armor/weapon fairly quickly.

This statue is shaped like a horse. Examining the statue tells you that a piece is missing. There is a dark maze in G8,G9,H8,H9 that contains several pieces for the horse. The unicorn horn, wings, etc. are found here. Collect the Unicorn Horn and return to the statue to install and start the fight.

Just Northeast (E9) of this statue there is a bust that when actioned tells you to submit 2 coins for an adult, and 1 for a child. You must use your Kraken Coins here. If you are a porkul, you only need 1 Kraken coin. All others require two.

The four busts leading up to gargoyle tell a story of four knights and a king. You will have to action the dark statue four times before it unlocks, each time it will ask you a question. Each time you answer correctly, you will have to fight a single knight. The final fight is all four knights at once. 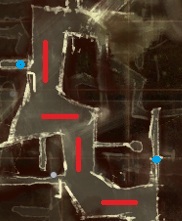 After speaking to the Dark Angel statue there are 4 items that need to be gathered and then turned in at a pedistal to gain the 8 items in total you require to offer the statues to access the boss fight. 2 of the items can be found in the sewers with the spiders and the other 2 are in the sewers with the frogs

The area where the blue dot on the right is contains 2 doors, the first will allow you to access the part of the sewers that has frogs, and the second door will take you to the pedestal (mirror) you need to speak to 4 times (once for each item) to get the 8 items required.

Once you have the items the red lines show roughly where the statues are that you need to speak to. The statues are in 4 pairs of 2, each pair contains a male and female statue. You can tell which is which by what the statues say, the male ones will say 'a male puts their foot forward' and the females will say 'a female puts their foot forward'. Offer the items to the female in each pair first and then to the male,

Once completed speak to the Dark Angel statue again and you can access the boss fight.

Side note: While collecting the items in the sewers for the statues it is recommended to farm 10 frog eyes and 10 spider silk in order to be able to access the seventh Dark Angel statue

It is advised to get all four items before the mirror. It is possible to pick up duplicate pieces and the mirror may hang up on them (delete the extras).

After speaking to the Dark Angel statue backtrack towards F3 (other direction out of sewer area) and you will see a cutscene, Follow where Arahawi went and another cutscene will play and you will receive the quest to collect 10 spider silkand 10 frog eyes. If you have these already run around the area until another cutscene starts and Arahawi will give you the required item to enter the final boss battle for Aria Reservoir

Note: You can only use the crystal if you have completed the dungeon

Retrieved from "https://wizardryonline.fandom.com/wiki/Aria_Reservoir?oldid=28743"
Community content is available under CC-BY-SA unless otherwise noted.